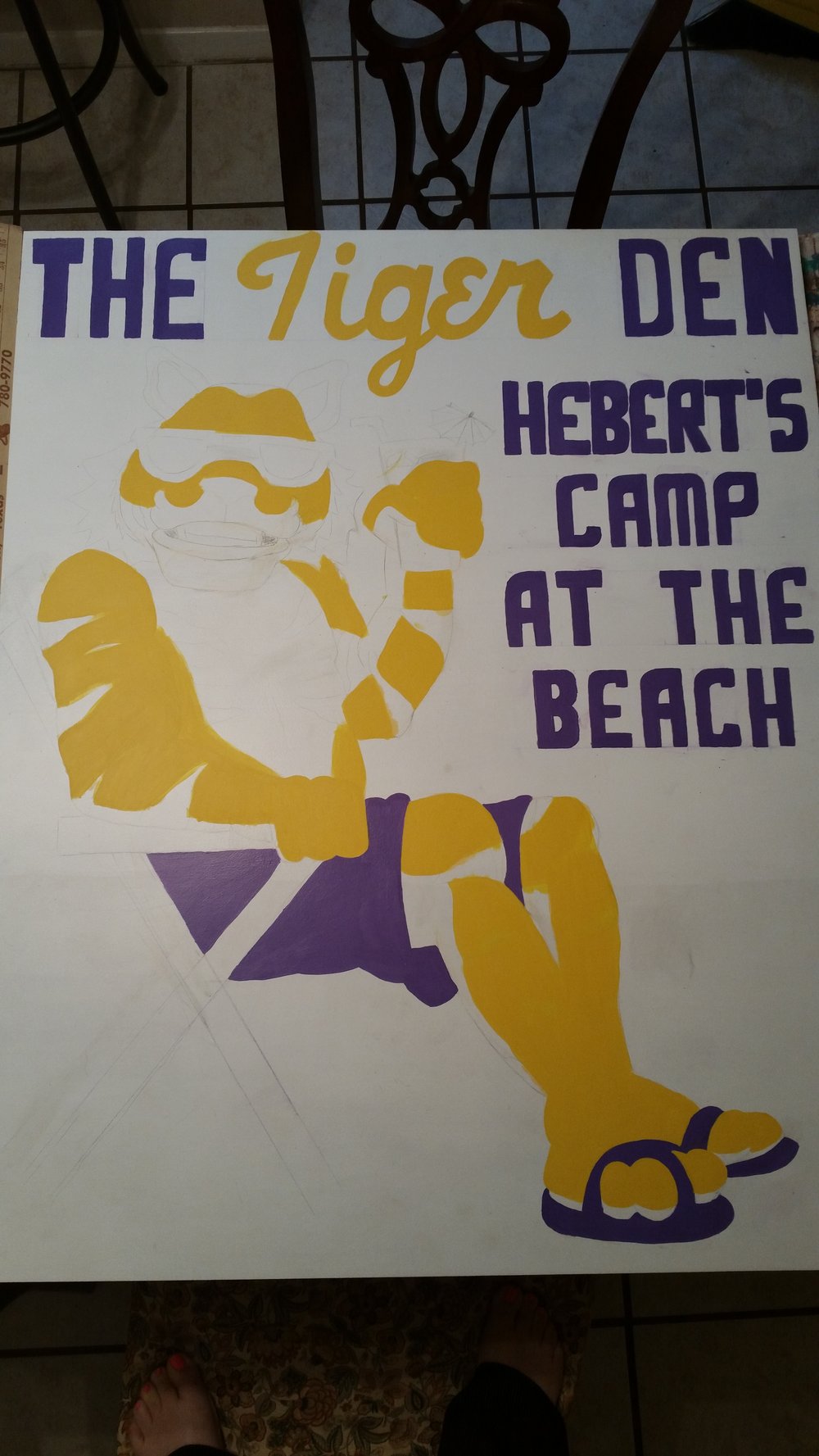 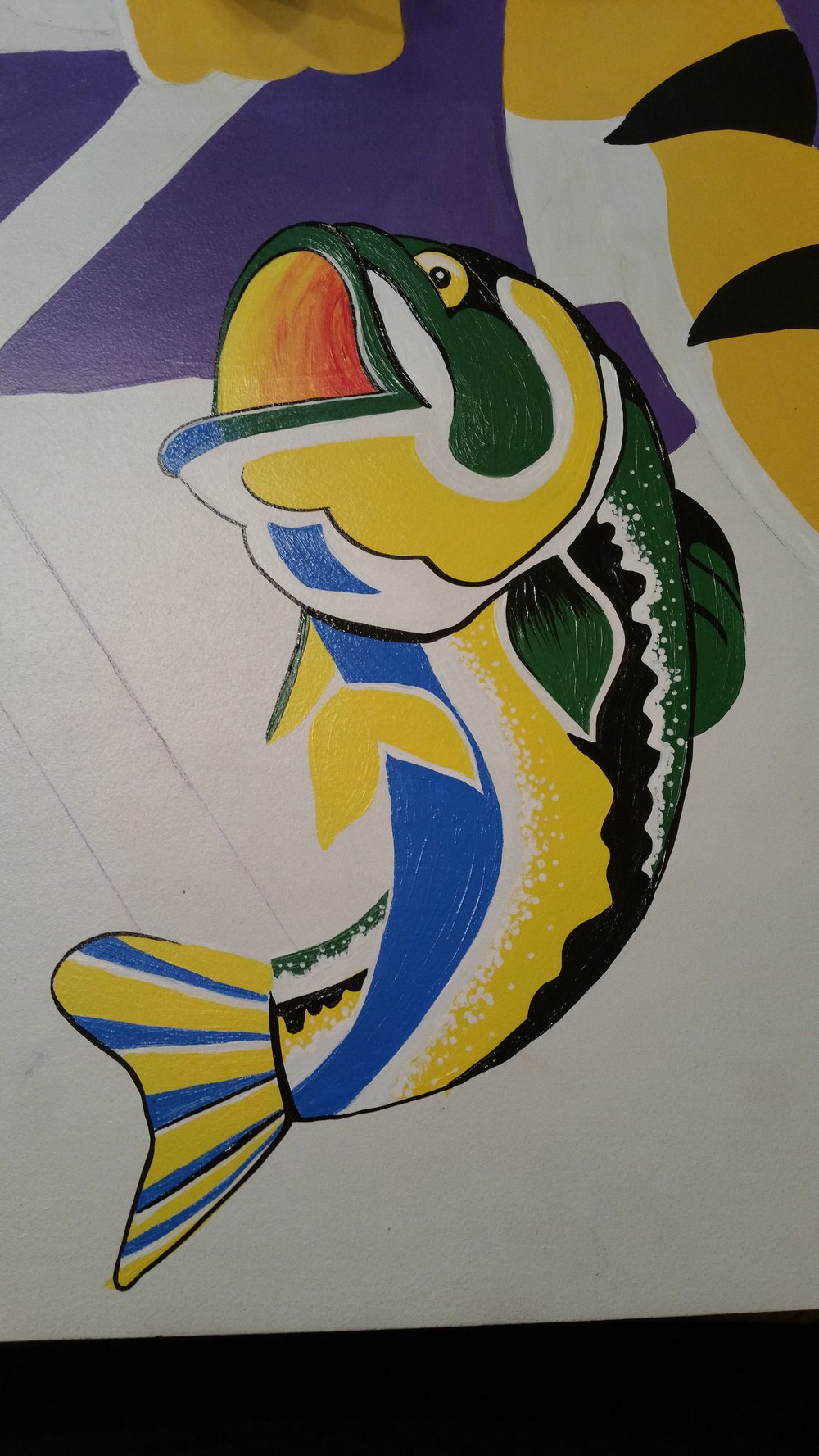 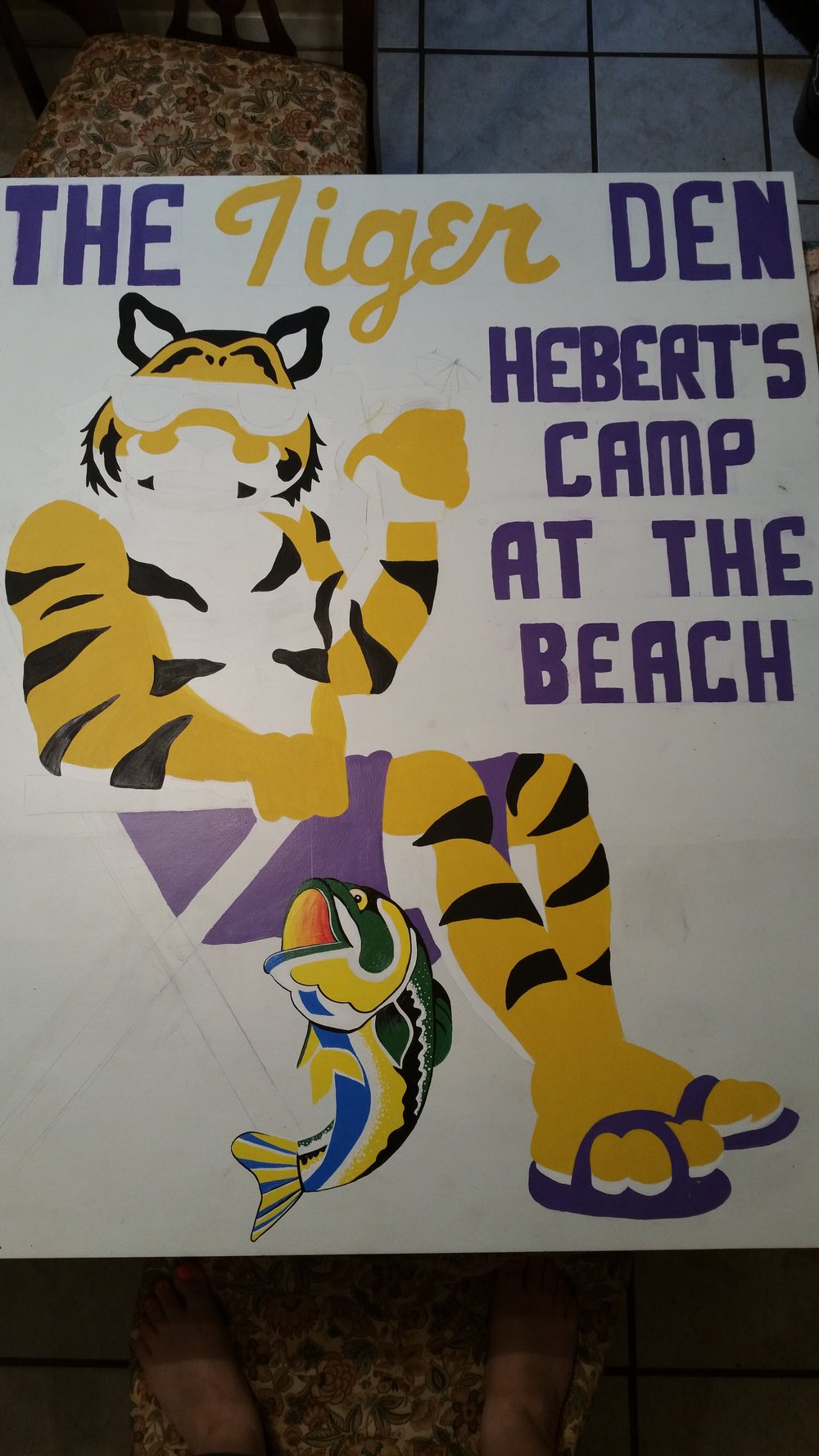 It's coming along nicely 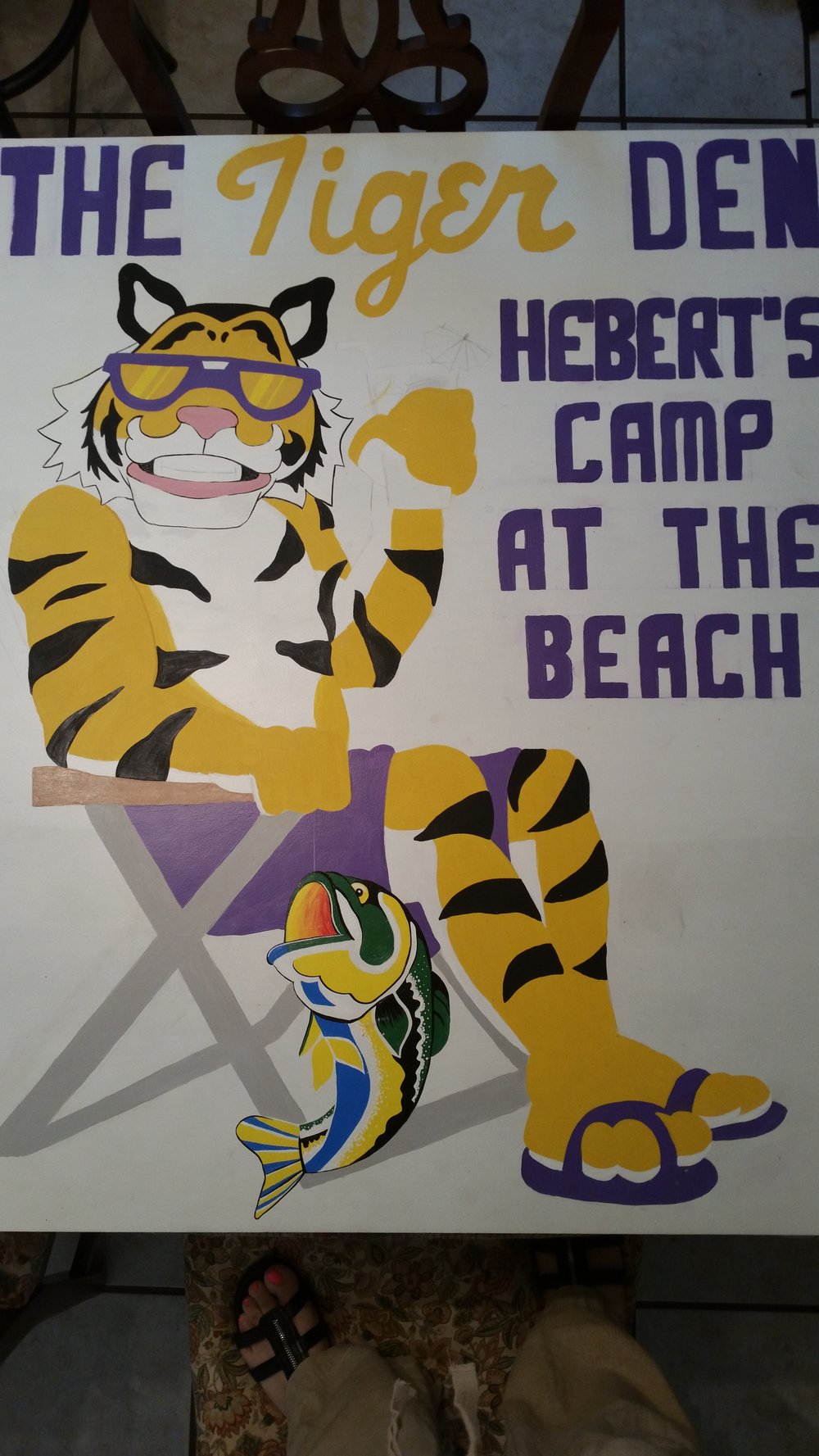 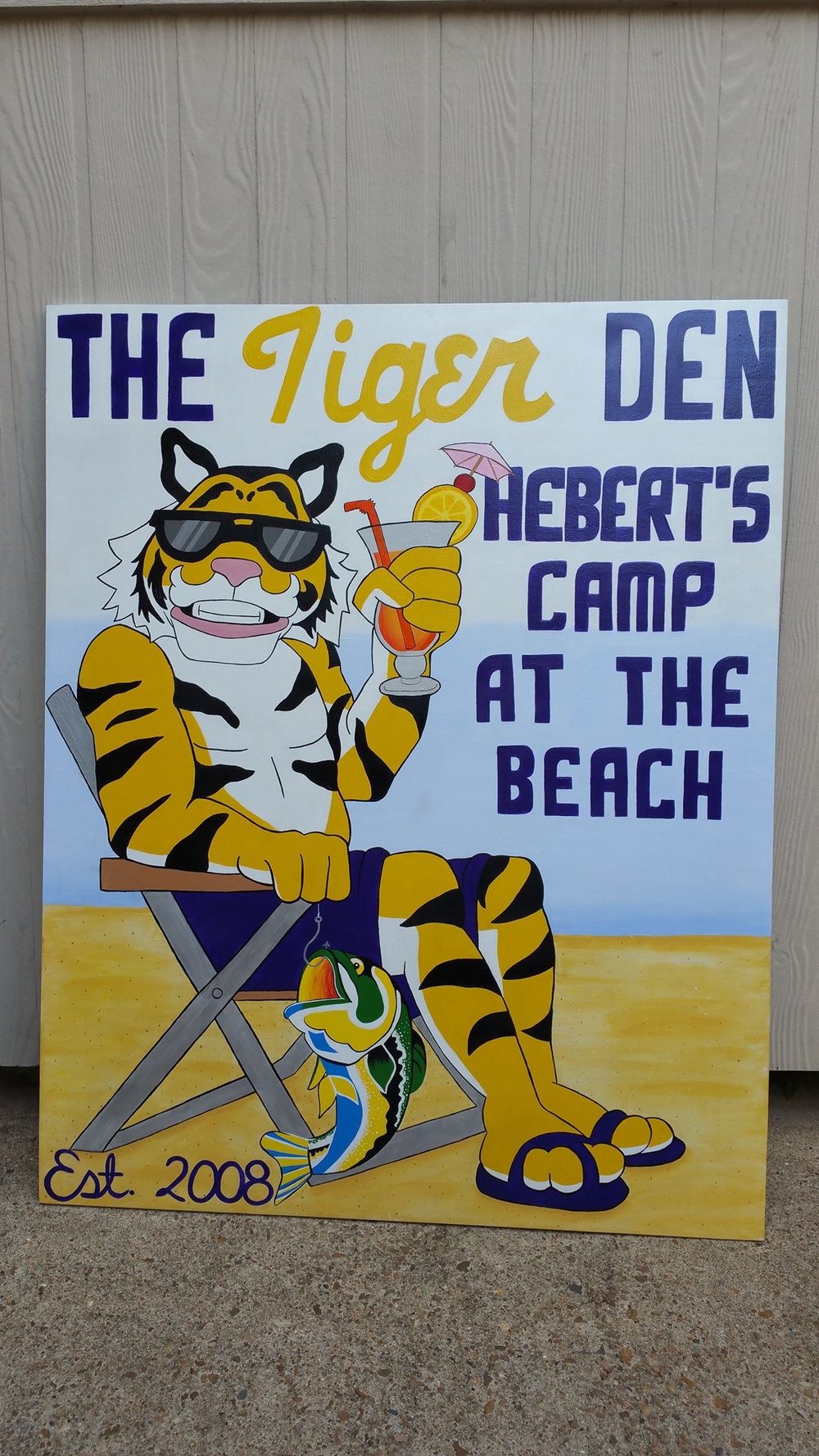 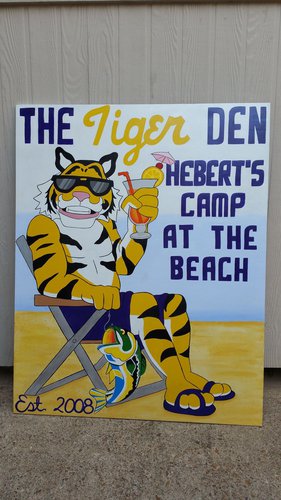 This painting took me two months to complete, most of the time was spent on the letters. This is a sign board that was sprayed with a white primer to get ready for painting with acrylic paint.

I started by drawing an outline of the tiger in watercolor pencils. After I drew him the size that I wanted, I used a yard stick to measure the letters, so that I was able to draw each letter the same height and width.

After I was satisfied with the drawing and the letters, it was time to start painting. I first started by painting the yellow (acrylic) paint on tiger and the word Tiger above his head. I couldn't find the exact shade that the customer wanted, so I mixed a light and dark shade of yellow until I reached the ideal shade. I then used purple (acrylic) paint for his shorts, sandals and sunglasses (which I decided to paint over in black later) and the other words. Next, I painted all of the white areas on the tiger and used a light pink that I mixed with a dot of tan for his nose and lip. Finally, I used black to paint all of his stripes, ears and the outline.

Next, I worked on the fish. Again, I used watercolor pencils to draw the fish. Once I was satisfied with the outline, I began to paint. I started with the lightest to darkest colors. I then used the back of the paint brush to create the dots along the fish. I dipped the end of the brush into white paint to make dots and continued to do this until there was a little dimension and character added to the fish. Finally, I outlined him with black paint using the smallest brush I have.

After I completed the fish, I started on the drink in the tiger's hand. I first used orange paint to the drink and straw, then used a light grey for the glass.  Then painted the lemon, cherry and finally, the umbrella.

I was not going to paint a background, because the original picture that my client asked for, had a white background. I decided that it would look better if I painted a beach scene in the back. Normally, the background would have been painted first. I used a sandy color paint that I had to paint the entire bottom of the board.  Then I used a paint brush to flick white, yellow, gold and tan to make it stand out. Lastly, I painted the sky a blue ombre.

Because this painting will be put on a beach house with the sun, rain and salty air, it needs to be protected. So, I used Deft to coat it and help protect against the Texas weather. I sprayed it several times, letting it dry completely between coats.